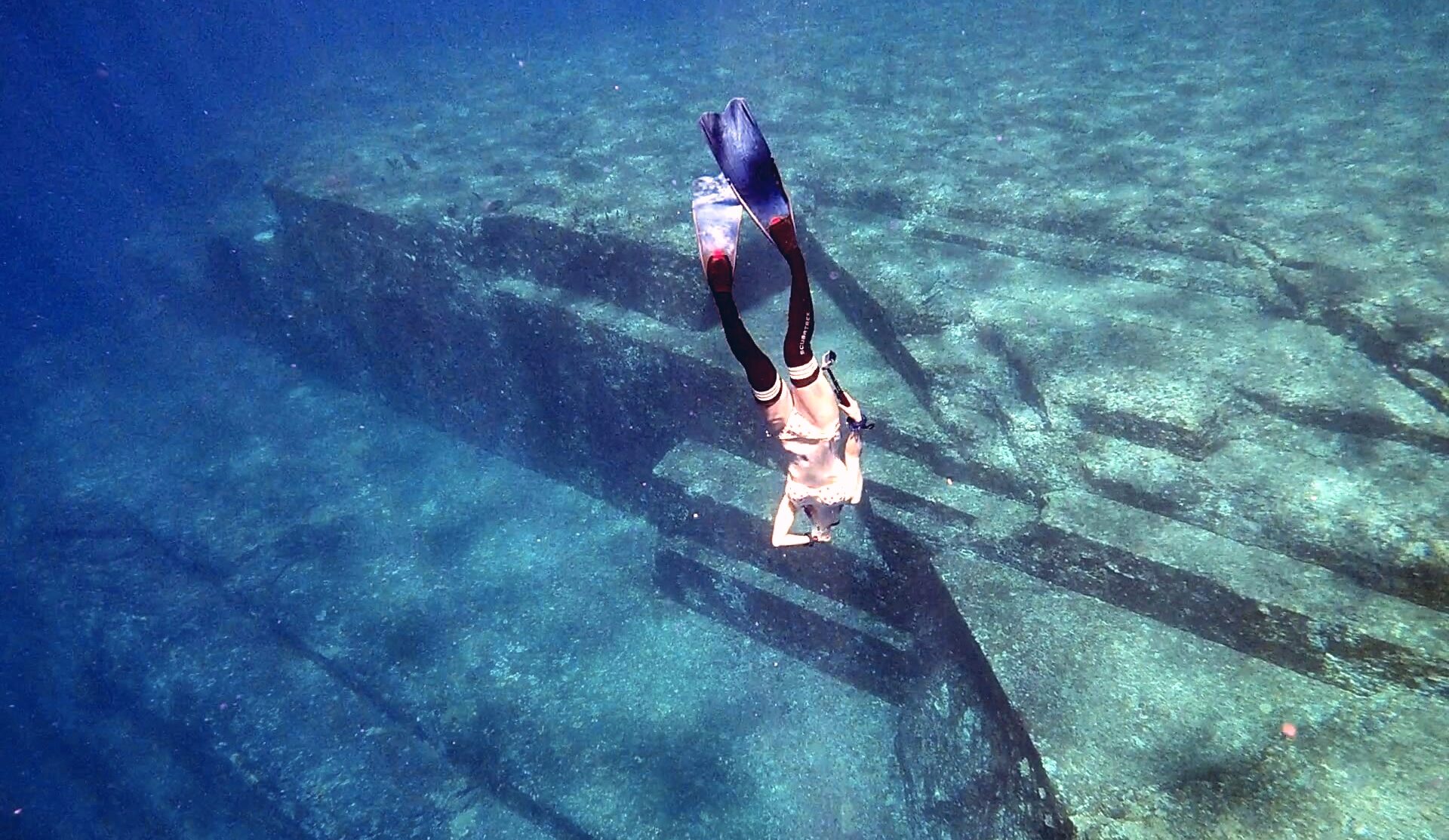 Long before the “Yonaguni Bunny” song came out, Yonaguni became famous for its Yonaguni Monument, a unique diving site with Atlantis looking like rock formation.

The Yonaguni Monument (Yonaguni Kaitei Iseki) is a submerged rock formation off the coast of Yonaguni, the westernmost of the Okinawa Islands, in Japan. Yonaguni is located 111km east of Taiwan.

Is the Yonaguni Monument Man-made or Natural?

It remains mystery as to how the Yonaguni Monument was made. Is the rock formation man-made or natural geology?

The rectangular rock formation is more than 50 meters long and 20 meters wide, with steps along its side.

why Yonaguni Monument can be Man-made

Many claim it to be man-made because 1. that rectangular rock is too long to be naturally formed and 2. It has stair steps. Even though the name of the diving site “Yonaguni Monument” is obviously implying it is man-made, there is no firm evidence to support that claim.

There are similar rock formations around the island, and the spacing for those individual steps on the side is far too wide and too high for a human to climb.

One thing is for certain: nobody really wants to find out whether it is natural or man-made as this diving site is attracting a large number of divers in Japan and around the world. Indeed, it is one of the most popular diving sites in Japan. And one of the reasons for its popularity is definitely the mystery to its origin.

We want to keep debating and wondering whether it is man-made or natural.

When is the best season to visit the Yonaguni Monument?

The best season, on contrary to popular belief, is NOT the summer. And here is why.

South wind is a bad sign for visiting the Yonaguni Monument

In summer, you usually get south wind most of the time.

As you can see, Yonaguni Monument is located in the southeast portion of the island. That means it is going to be hard for a boat to get there from Kubura port with the south wind and too far from Sonai port.

And even if you manage to get there, the waves from south will be hitting the Monument site that it makes far from ideal for divers and snorkelers to calmly observe the Monument.

Best season is Fall to visit the Yonaguni Monument

Then, when is the best season?

Why Fall is the best season

The chance of getting to the Yonaguni Monument site increases when the wind blows from the north (not too hard though). That means you’d better visit there sometime between September and November.

Winter and Spring if your priority is to see sharks

Or the alternative will be the full winter and early spring.

I can recommend going there for the Yonaguni Monument in the winter only if you are a drift diver who enjoys diving with Hammerhead Sharks. You must be aware that all four diving centers in Yonaguni let you dive only if you are going for shark diving from December to early April.

Even then, going to the Yonaguni Structure is not guaranteed during the winter season as most diving centers give priority to showing hammerheads to the divers.

Early May if your schedule allows you

May could be another alternative as the temperature is still not extremely high and the highest season for Yonaguni is just over after the Golden Week.

The only concerning element is that you might encounter the strong south wind called “Ka-chibai” in late May, then you are surely not visiting the Yonaguni Structure.

How to visit the Yonaguni Monument:

Snorkel or Scuba? at the Yonaguni Monument

To dive or snorkel… that is the question.

First, you need to decide whether you want to see the monument by snorkeling or by scuba diving. I’d personally recommend doing both. Once with scuba gears and once without.

The benefit of seeing the monument from snorkeling is that you can capture the view of the whole thing, while you get to go through the small tunnel-like entry gate (城門 ぐすくもん see below) if you go there by scuba diving.

Book with a diving center to visit the Yonaguni Monument

If you want to skip the hustle to book your visit to the Yonaguni Island and the underwater ruin, you can contact me at trilngirl@gmail.com to arrange your customized trip.

Book a glass boat tour to visit the Monument

If you don’t want to bother getting into water at all, you can go there on a glass boat tour organized by Sow Wes.

Let me know what you thought of the Yonaguni Momument once you managed to visit there. In your opinion, is it man-made or a natural rock formation?